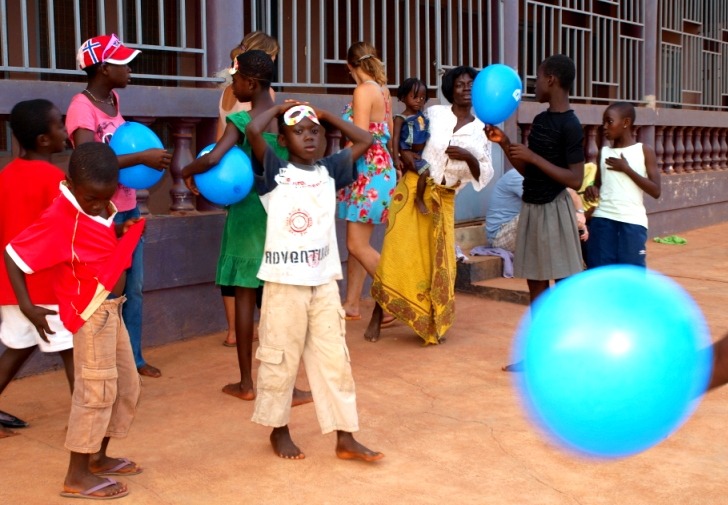 I am very happy that Assan agreed to write several articles for us. His first article is about volunteering and picture taking and the effect of the images also portayed in the media.

Assan is a Finance Analyst, a Researcher and Teacher. He has passion for financial literacy  education and has spent the last few years assisting NGOs promoting financial literacy and inclusion.
He is a Pan-Africanist and has volunteered for several black movements.
Assan is a Father and preaches on his spare time.

The Power of Images

Images are powerful. They don’t only convey ideas but also emotions and more. Indeed, images preserve a moment in time to remind us of that moment. Whiles some of these images bring happiness, others convey sadness. It is therefore not surprising when people keep images for years to tell a story to their descendents. Growing up in a small village called Banko in the Ashanti Region of Ghana, taking pictures was exciting and done on occasions especially during Christmas. I will dress in my newly sewn dress (my father is a tailor anyway) and stand just by a flower for “photoo” to take pictures. I still have some of these pictures in my album and they give me some nostalgia anytime I go through them. No wonder the adage, “a picture is worth a thousand words”.

Telling the African Story through the Eye of Westerners

It is therefore not surprising when the West (Whites) seek to tell the story of Africa through images. Over the years, Africa’s history has been defined and told from the perspective of the West, creating a clear bias in the way we see the continent.
The Western narrative concerning Africa has focused on a historical vision of a “needy” continent, rather than on Africa’s contributions to the history of humanity. It is common to see images of African children who are being portrayed in the West as hungry and sick.

The Role of White Volunteers

White volunteers who often flock to Africa with the intention to help are also taking a lot of these stereotyping pictures. Volunteers are people who, unpaid and of their own free will, contribute their time, energy and skills to benefit the community. By this definition, white volunteers in Africa should contribute their time, energy and skills ETHICALLY to the benefit of the community.

As a child I had many encounters with volunteers

I must admit White volunteers have been of immense benefit to several developing countries including Ghana. In fact, my hometown of Banko has been a beneficiary of the benevolence of white volunteers. In the early years of the 20th century, Banko was a washed with White volunteers from the Netherlands.

Their contribution to education, health and even job creation is enormous. I believe there are similar stories across several developing countries. However, there are several ethical issues bedeviling the activities of volunteers in Africa painting a wrong picture of Africa to the Whites after the volunteering period.

One of these ethical issues has to do with taking pictures of children.

I have a vivid memory of some white volunteers from Netherlands taking pictures of me and other family members including my grandmother. Like while we were coming from the farm in dirty clothes and with firewood and foodstuffs on our heads. This was 2001 and I was in primary 6. At the time, it seemed fun and therefore I smiled to the cameras for the pictures. I had no idea what was going to happen with the pictures. The volunteers didn’t explain that to me neither was there consent of my guardian.

Anthropologists Arthur and Joan Kleinman state that images of distant, suffering women and children suggest that communities are incapable of or uninterested to care for its own people. The photographs justify colonialist, paternalistic and imperialist attitudes.

The volunteers stayed in my family house. Therefore it was common for them to share toffees and other cookies to the children in the house. They didn’t know our names and we didn’t know theirs, either. After promising to take me abroad for studies, they never returned. This was a common theme across the whole Banko community.

In the advent of technology, the cell phone camera is everywhere and photo-taking is a possibility for many. It is more difficult to control the taking of photos and sharing over the internet, particularly because of Social media (Facebook, Instagram, etc.).

Yes, publicizing the pictures has advantages such as

The Effect of Images on the Perception of Africa

But the risk is high for children. Especially child protection issues should always be at the forefront of any decision to publicize an image of a child. Pictures of starving, emaciated and diseased African children are frequently used to help raise funds for international NGOs.

But do these images paint a fair and balanced picture of life in other countries? Do these pictures help to promote the rights of children in the long run?

The effect of some of the pictures taken by volunteers was shown in a study conducted by Richard Borowski in Leeds University. He sought to assess the perception of White youth on Africa. He asked the youth to choose a picture that best depicted Africa. “Over 73% selected a picture of hungry children holding out an empty plate. Subsequently 53% selected an image of straw huts in a rural setting”.

The narrative for Ghana and Africa has to be changed!

Horrifying pictures of starving children, war, diseases as seen in the Western media is not a complete picture of Africa. If the media continues on their splurge of negative African stories, Africa will continue to be seen as the “scar on the conscience of the world.”
The uniform view Westerners have of Africa reduces the color painting of nearly a billion people to a single pixel.

There is the need to shirk off the imperialists’ mentality shown by some White volunteers in their volunteering trips to Africa.

There is an online coure that helps you to do better while volunteering in an african country!

Did you always dream of volunteering in Africa? To help the poor people? To make a difference? And do you know how you can actually help? By changing the story while volunteering. By acknowledging for who you are in an African country! Social media posts and captions are an important part of the training that we offer. As well as white saviorism, stereotypes and white privilege. Are you willing to do the work so that you not only have more fun and impact while volunteering in an African country but the people you are ‘helping’ as well!

In a few months, I will leave for Cameroon to do voluntary work. Thanks to this course, I have a much better and fair idea about my time in Africa.
A valuable and fun course you will not be regretting!

As you might remember Moon&Star guesthouse has changed the volunteer program drastically. If you want to read more about the change and why we changed I invite you to read the following blog post ‘Volunteering in Africa – Out of date!?’

Our volunteering program has a big emphasis on sustainability and no negative impact on the community we work in. For example, we offer an online preparation program in which we already discuss topics like stereotypes, picture taking, and Social media.