What about the social mission of Moon&Star guesthouse, Pat? 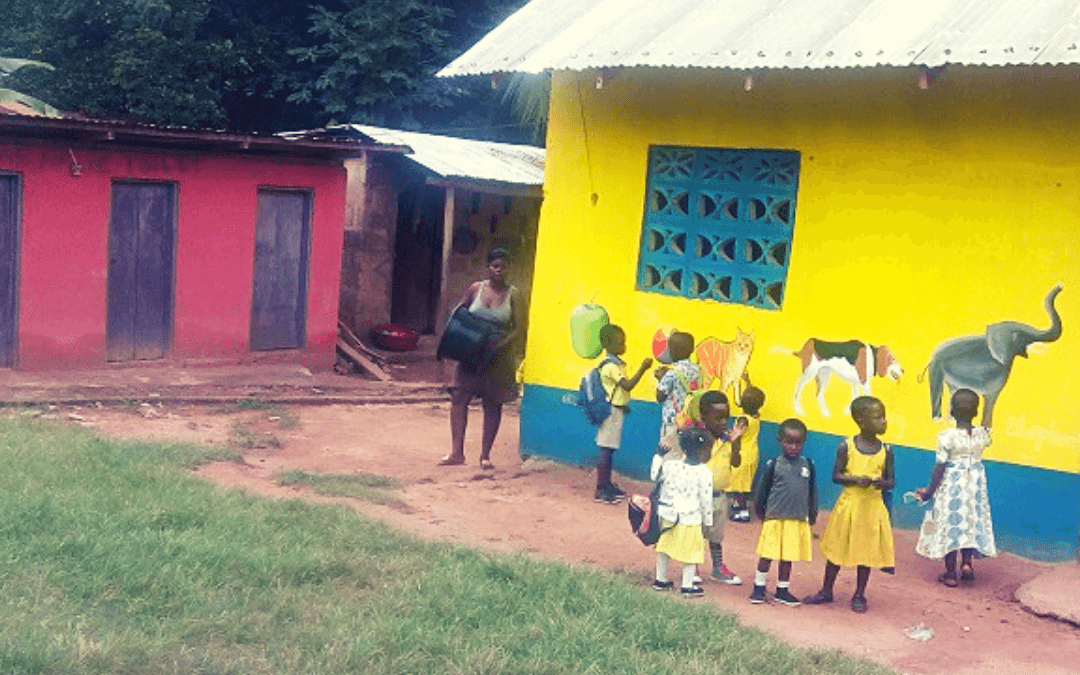 As you may know, Moon&Star guesthouse is a company with a social mission, which means that we are a socially engaged company and support various local projects. I don’t talk much about our social mission, in this article I will tell you why and what the consequences are. Finally, I will tell you about some of the projects that we support and have supported with Moon&Star guesthouse.

What is the social mission of Moon&Star guesthouse?

This is a very good question, which I hear more regularly. Our social mission is very easy to talk about in a live conversation, but on social media and on the website I find it very difficult to talk about.

When I grew up there was a government campaign in the Netherlands that stated; A better world begins with yourself. That campaign fits me very well as an idealist. It used to fit me when I first came to Ghana and I had many characteristics of a white saviour.
It suited me when I started my own company and I believe that, as a company, we should definitely be socially involved. And it still suited me when I learnt more about my own privileges and my being a saviour.

I live by what I believe, learn and practice.

In short, the more I learned and read, the harder I struggled with the communication of raising funds for the projects we support. How do I communicate? What pictures do I post? And what story do I tell? A story where I am not centered, but where I have often seen that in the end I became the central factor because of the comments. ‘Ooooh, what a wonderful job you are doing!’, ‘How much you are sacrificing!’, ‘How nice for those poor people!’

Any business, anywhere in the world, should be socially engaged

Don’t get me wrong, I know that these reactions come from people’s hearts. But it is not about me! The guesthouse and I sometimes facilitate something, but it is about the local people who ultimately do the work. And besides, a better world starts with yourself… As a business, I believe that any business, anywhere in the world, should be socially engaged. And if we could do that without shouting it from the rooftops or boosting… Some time ago I wrote an article about voluntourism and volunteering in Africa and why there’s a need to always be critical.

There are downsides to not actively sharing information about our social mission.

An obvious downside is that it is quite difficult to raise funds. In normal times, it is ‘all right’ because I communicate directly with guests and their tips and donations go straight to the projects. No, don’t worry, we don’t go around asking our guests for money.

But even in normal times, we could do a lot better with fundraising if I would find the right way of communication.

Another disadvantage of giving low profile support is the way fellow town members see us. In Ghana, it is quite normal to tell how much money you are donating. In fact, this is announced at funerals and fundraisers. And often, the more people attend, the larger the donations. To see and to be seen.

I didn’t really realize how much of an impact it was having until I posted a photo on social media in 2018 where I was handing over a donated laptop to the Methodist school. The next day lots of people in town approached me and were thanking me. I was a bit confused about the effect of this picture. A donated laptop was nothing compared to all the projects that we are involved in.

And I didn’t understand why all this gratitude for this particular action. It was a donated laptop, which compared (in value) to nothing when looking at all the other projects.

But then again, when you don’t communicate often about your low profile actions, the actions won’t be noticed.

For once I will summarize the projects in which Moon&Star guesthouse was and is involved.

The collaboration between ‘Crossing borders for Ghana and Moon&Star guesthouse

Moon&Star guesthouse works very closely with the NGO ‘Crossing Borders for Ghana’, this foundation runs a children’s home, has supported the local Senior High school from the beginning, has renovated several schools in the area and built new classrooms.

The NGO has also played a very important role in the construction of the health center in Banko and has built the maternity clinic. In addition, there are countless families that have been and continue to be supported by the foundation. Many children are able to follow a further education thanks to ‘Crossing borders for Ghana’. And yes, laptops have been collected for all the students that furthered their education under the care of the NGO.

What I appreciate most about Anja and her NGO is that they never ‘save’. Anja knows that the knowledge and power are here in Ghana, but that there is a lack of funds. No lack of ‘heroes and world changers’. You will never hear anyone from the NGO mention: ‘Thanks to me there is now a Senior High School and a Health center’. You will understand that this is also disadvantageous for the NGO ‘Over grenzen voor Ghana’ (across borders for Ghana) sometimes in terms of fundraising…

The NGO sends all the children of the children’s home to school and caters for them until they finished their education. Even though the advice is to let them be when they reach 18. To do this, we need a lot of funding.

Thanks to donations from guests, volunteers, and friends we can accomplish more.

Besides the cooperation with ‘Crossing borders for Ghana’, Moon&Star guesthouse has been able to accomplish more, thanks to donors, tips, and great volunteers and guests. We too have been able to send children to school and support families. We have raised funds for sick children. Electricity has been installed from the village to the aforementioned Senior High School. An ICT center has been realized and we have built a beautiful playground.

For the past three years, we have been able to assist the Banko Methodist preparatory school. They have been able to build new classrooms. There is new furniture. And it is the only school in Banko that has toilets and running water. Besides this Moon&Star guesthouse has facilitated several workshops.

Thanks to Joetz, we were able to make the last donation a month ago, which enabled them to do some maintenance to the school and they now have a buffer to pay the teachers’ salaries after being closed for 10 months.

Why now this openness on social media and the website about our social mission?

Firstly, because it is becoming increasingly difficult to raise funds. Secondly, transparency is of course very important in the context of sustainability. And even though we have always been transparent to people who ask for it and to donors, maybe it is time for public transparency.

And finally, we started a new joint initiative: the Banko women center. This project deserves all attention! Click here to read more about the project!

Thanks to this project there are also possibilities to work as a volunteer in Banko! Click here to read more about volunteering with Moon&Star guesthouse and Banko women center!